June 27, 2017 From rOpenSci (https://ropensci.org/blog/2017/06/27/packagemetrics/). Except where otherwise noted, content on this site is licensed under the CC-BY license.

Before everybody made their way to the unconf via LAX and Lyft, attendees discussed potential project ideas online. The packagemetrics package was our answer to two related issues.

The first proposal centered on creating and formatting tables in a reproducible workflow. After many different package suggestions started pouring in, we were left with a classic R user conundrum: “Which package do I choose?”

With over 10,000 packages on CRAN - and thousands more on GitHub and Bioconductor - a useR needs a way to navigate this wealth of options. There are many existing tools to categorize and facilitate searching of R packages such as CRAN TaskViews, RSeek, Rdocumentation, Crantastic!, METACRAN and CRANberries. GitHub also provides lots of great metrics for individual packages developed there.

However, these resources mostly aggregate information at the individual-package level, or compare static sets of packages that may not reflect recent breakthroughs. To find a suitable option, users must sift through and compare individual packages, which can be a tedious and time-intensive process - particularly for someone new to R.

The plethora of packages to create reproducible tables was an example of a second, broader issue: “Avoiding redundant / overlapping packages”. That conversation turned to the process of reviewing packages. Combining the two issues, we set out to to create a guide that could help users navigate package selection, using the case of reproducible tables as a case study.

Making use of the unique opportunity of the unconf, we asked other participants – all experienced R users/developers – how they discover and choose the packages they use. Some questions we pondered included:

In addition to the package catalog resources listed above, unconf participants also rely on personal networks or social media such as Twitter to learn about new packages. A typical workflow for choosing a package looks like:

While there was wide variation in how users gathered their initial lists of packages, they relied on common indicators to narrow their lists, including, “Is the package actively maintained?” and “Is it being tested? If so, how?”. The last step often brought out personal preferences (“I pick the one whose API I like best”).

As the workflow indicates, these two approaches are best used together, rather than relying on a single one.

At the unconf, we focused solely on the task of package assessment, leaving aside ideas for community involvement, discussion on how to identify gaps in existing packages and, related, when to create your own package. It was already a big problem to tackle in just two days!

Acknowledging the importance of both types of assessment – metric comparison and human exploration – we set out to create a package which could a) be used to collect data about R packages and b) contain an example for a more in-depth exploration of a set of packages (for creating reproducible tables) in form of a vignette.

By making use of information from CRAN, GitHub, and StackOverflow, we collected metrics to answer some of the following questions:

Our discussions informed a list of things people commonly look for when they install a package and explore it manually:

With that, we got to work! 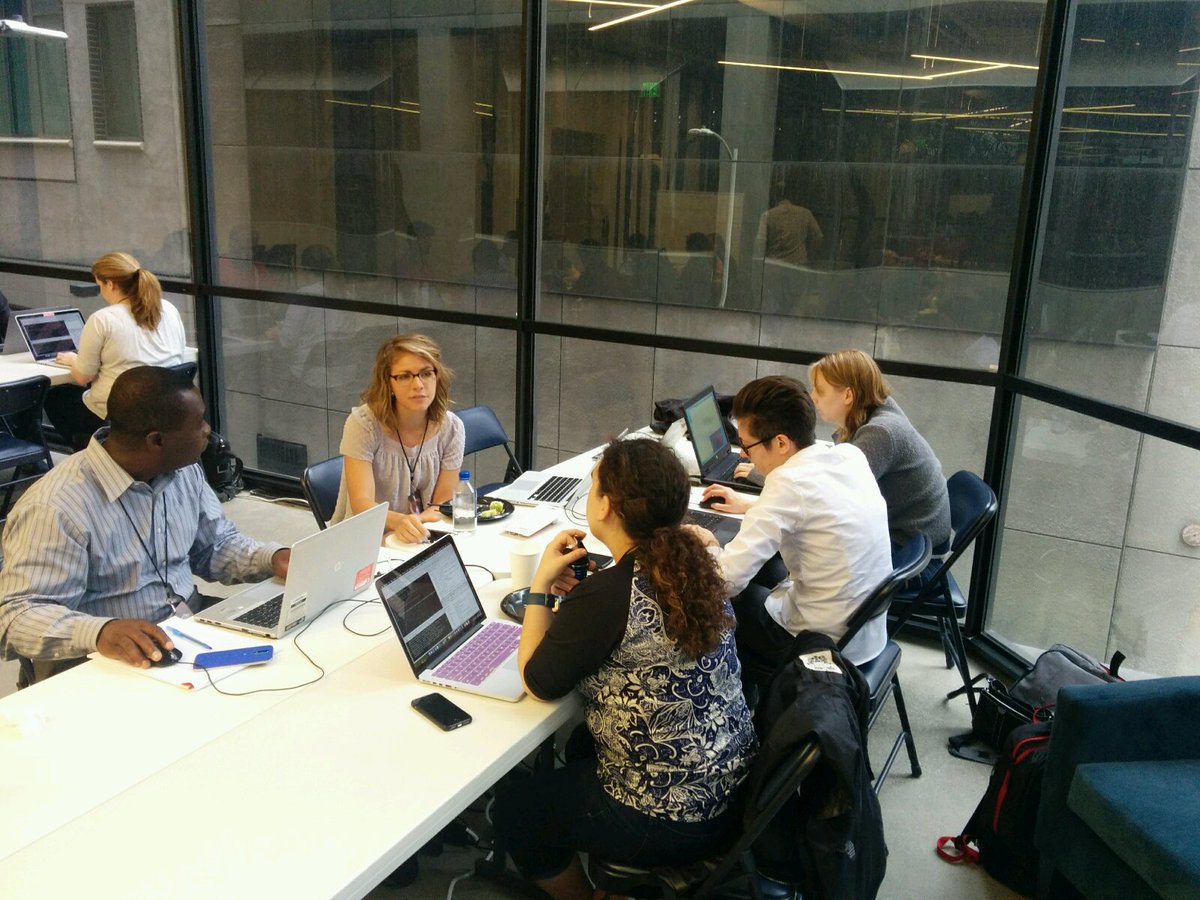 With Erin collecting information from CRAN, Becca and Sam from GitHub, Lori and Hannah from StackOverflow and William diving into table-making packages, we managed to produce an R package. Working title: packagemetrics.

Our package can be installed from GitHub:

Since our case study is table-making packages, we provide a collection of those package names in a vector named table_packages. With that we can collect metrics for each package using package_list_metrics():

This yields a data.frame with all the metrics:

This data about table-related packages can be turned tranformed with the formattable package (so meta!) into a beautiful table of package metrics:

As to the case study in expert user review: the start of a review of a selection of table-making packages can be found here.

🔗 A small step on a long journey

At this stage of a project, there’s always a list of fixes and enhancements to make. This project is no different, especially given that this is such a broad topic!

The metrics currently reflect a first stab at priorities for us and other unconf participants - there is room for improvement. For instance, we’d like to gather more metrics to shape a comprehensive snapshot of various categories (e.g., level of engagement, newness, influence, …). Another idea discussed prior to the unconf was that of attempting to capture (an indication of) the functionality offered by a package via keyword search through the package’s DESCRIPTION, vignettes and help pages.

We welcome suggestions and inputs via the issue tracker! This goes both for the calculated metrics and the package review process illustrated in the vignette.

Based on ideas generated at the unconf, the packagemetrics approach may have the potential to be useful in various places:

As to the broader problem of deciding what package to use: it remains both unsolved and worthy of future attention. Those interested in this challenge should follow along at useR! 2017 in Brussels later this summer, where the session “Navigating the R Package Universe” looks particularly relevant.

We look forward to community discussion on this, be it at useR! or elsewhere. Thank you to rOpenSci and everyone involved for making #runconf17 such a wonderful event!