rOpenSci | How much work is onboarding?

May 3, 2018 From rOpenSci (https://ropensci.org/blog/2018/05/03/onboarding-is-work/). Except where otherwise noted, content on this site is licensed under the CC-BY license.

How much work is onboarding?

By Maëlle Salmon, Noam Ross
This blog post is the second of a 3-post series about a data-driven overview of rOpenSci onboarding. Read the intro to the series and the first post about data collection.

Our onboarding process, that ensures that packages contributed by the community undergo a transparent, constructive, non adversarial and open review process, involves a lot of work from many actors: authors, reviewers and editors; but how much work? Managing the effort involved in the peer-review process is a major part of ensuring its sustainability and quality. In this post, we’ll take a look at the effort put in by participants in the review process, and also learn something about exploring GitHub data along the way. 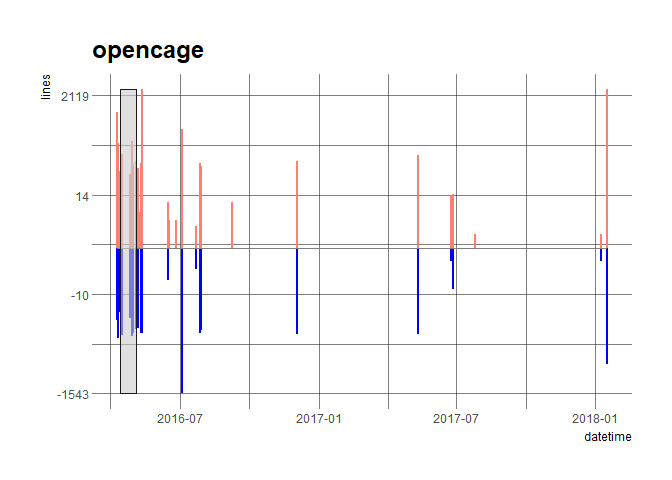 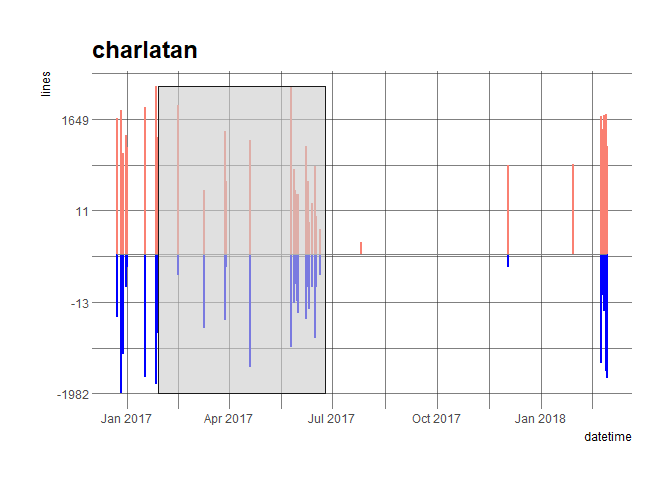 When looking at all onboarded repos, we don’t see a general pattern to commit histories. Commits have diffent sizes, and the activity frequency is highly variable. While we see the updates to packages that occur during review, there is just as often change again after onboarding, as packages continue to improve and be maintained. This highlights an important aspect of our peer review, which is that acceptance is not the end of the process. While we aim for the process to ensure high quality at acceptance, packages are not static moving forward. Not all deficiencies are detected by peer reviewers, and further improvements and maintenance will continue. This is why many of our standards are about maintainability, and our process is in part an approach to onboard authors into a community of dedicated and supportive package maintainers.

We do try to onboard mature packages, i.e. that are not drafts. Furthermore, the absence of general patterns in the previous figures could be due to different age at submission. How old are packages at submission? 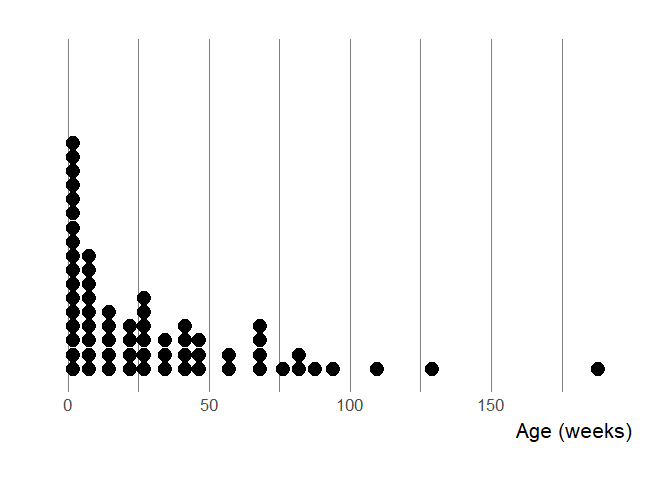 On this dotplot, the x-axis represents age at submission and each dot is a package falling in that age bin. We say apparent age because the first commit might happen a long time after the package was created, although often one makes an initial commit not long after having started to work. We needed to filter positive age because in one case the GitHub repo of the onboarded package was apparently deleted and re-created without history after approval. Such things happen, thankfully the package wasn’t lost, just its history!

Many packages are submitted while still very young which might indicate rapid development. It might also mean some authors viewed onboarding as a part of development, i.e. authors knew they intended to submit quite rapidly. For instance, Maëlle developed opencage in just a few days, then submitted it to get it ready for wider use by the community.

How much effort is put in by reviewers in this process? Reviewer time and effort is one of our most precious resources (you can read more about reviewer motivations and perspectives in other blog posts by Mara Averick, Verena Haunschmid, Charles T. Gray and Miles McBain). We measure this effort by asking reviewers to self-report the hours spent reviewing. We do so to understand the amount of effort we are asking reviewers for, so we can let new reviewers know what to expect, and so hopefully in the future we can measure the success of efforts to automate some reviewer tasks.

We have self-reported reviewing times for 136 of 184 reviews. 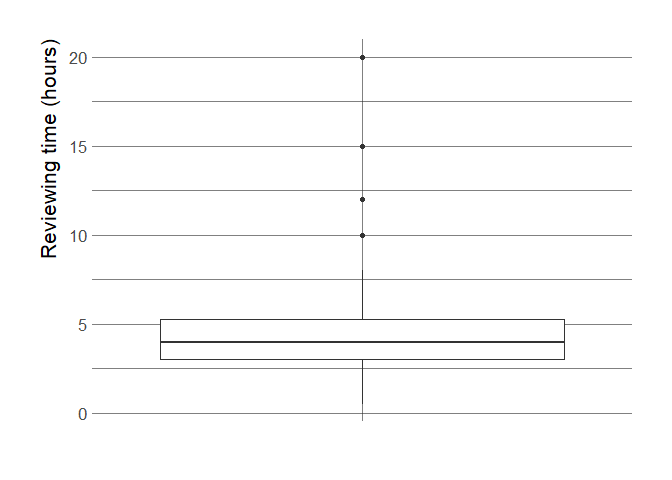 It appears to take our reviewers a similar amount of time to review R packages as scientists take to review a manuscript (5 hour median and 9 hour mean).

One potential question is whether reviewer time is affected by the size of the package reviewed as measured by for instance number of exports (classes and functions).

Interestingly, we find no relationship between the reviewing time and number of exports: 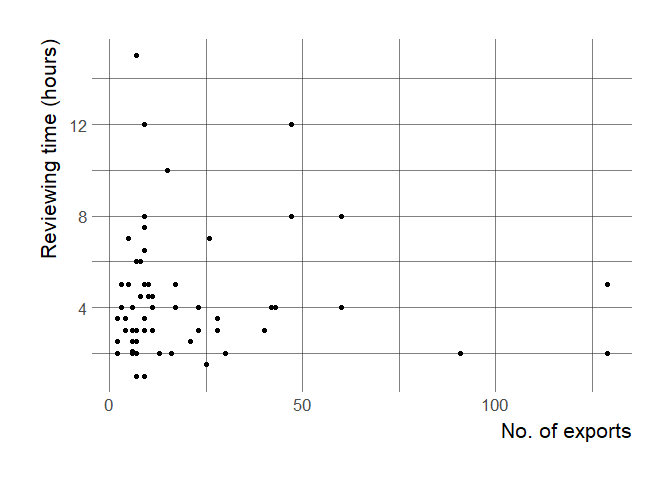 There are a few potential explanations to this that might be fruitful to explore. For instance, does this mean that there’s only so much time, and so larger packages get less scrutiny per line of code or per export? Or does review time just depend more on the reviewer than the package?

Editors manage the review process, performing initial package checks, identifying and contacting reviewers, and then moderating and cajoling the process forward. Our best measure for editor effort is the number of packages handled by an editor in a given time frame, which we can track from the assignments on GitHub issues since the start of onboarding. Looking at this over time, we can see how editor workloads changed in response to growing number of assignments and how we have attempted to manage this by expanding our editorial board: 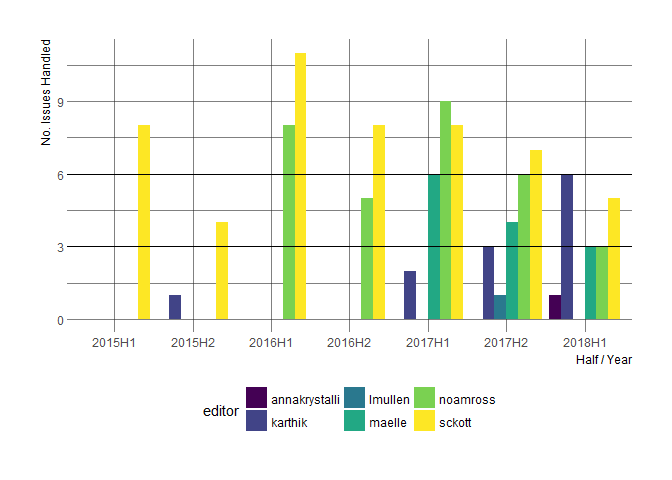 As an side-note, the same data allows to visualize the increase in the number of submissions. 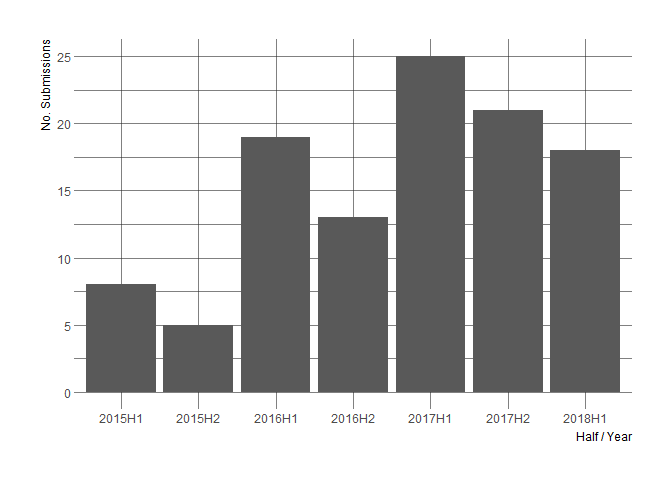 As mentioned in this blog post about the authors and reviewers survey, we’re in the process of trying to maximize automation of all than can be automated in order to reduce and simplify work for everyone involved. This way, humans can focus on what they’re best at. Our current automation efforts include two packages in development: one for package authors, rodev, by rOpenSci staff, and one for package reviewers, pkgreviewr, by community member (and guest editor!) Anna Krystalli. We also are working on automating most of the checks that use goodpractice::gp so they are run on CI infrastructure automatically on submission, rather than requiring editors to do so locally.

If you liked this data exploration, stay tuned for the third and final post of this series, about the social weather of onboarding as characterized by a tidy text analysis of onboarding threads! And don’t forget to check out the first post of the series, about data collection, if you haven’t read it yet.