We started the package in late 2018 following three main motivations:

We have a wider motivation: we want the roads to be safer. By making data on the nature of road crashes more publicly accessible to inform policy, we hope this package saves lives.

stats19 been tested and peer reviewed thanks to rOpenSci and is now published in the Journal of Open Source Software1, making this an ideal time to present the package to the world 🚀. For installation and the code, see its home in rOpenSci: https://github.com/ropensci/stats19, and the package documentation at https://itsleeds.github.io/stats19/.

In this post, we’ll provide a bit of context, show how the package works, and provide ideas for future work building on the experience. Version 0.2.0 has just been released on CRAN.

Robin Lovelace (package maintainer) has written code (robinlovelace/bikeR) for an academic paper on cycle safety in Yorkshire based on STATS19 data2. Malcolm Morgan (one of the package authors) has written code to process different STATS19 data for the Cycling Infrastructure Prioritisation Toolkit (see cyipt/stats19).

The large and complex STATS19 data from the UK’s Department for Transport, which is open access but difficult-to-use, represented a perfect opportunity for us to get stuck into a chunky data processing challenge.

The name comes from a UK police form called STATS19 (note the capital letters). Another document called STATS20 is the guidance for officers filling in a STATS19 form. The Department for Transport (DfT) also names the dataset STATS19 on the main web page that links to open access road crash data.

One of the reviewer comments from the rOpenSci review process (which has 77 comments - lots of knowledge shared) alluded to the package’s esoteric name:

I confess I wish the package name was more expressive–stats19 sounds like an introductory statistics class.

We agree! However, the priority with the package is to remain faithful to the data, and alternative name options, such as stats19data, roadcrashesUK and roadSafetyData were not popular. Furthermore, the term ‘stats19’ is strongly associated with road crash data. On Wikipedia, the URL https://en.wikipedia.org/wiki/STATS19 resolves to https://en.wikipedia.org/wiki/Reported_Road_Casualties_Great_Britain.

An important point is that the dataset omits crashes in which nobody was hurt, as emphasised by another government document.

The importance of road safety and informed decision making based on crash data cannot be overstated. Deliberately avoiding the matter of life and death of road safety, two numbers from a strategy document by the UK government (2011) are worth mentioning to show the scale of the numbers:

The economic welfare costs [of road collisions] are estimated at around £16 billion a year while insurance payouts for motoring claims alone are now over £12 billion a year.

Even more shocking are the global statistics, as summarised by an open access and reproducible paper submitted for publication, which uses data from the package to explore car-pedestrian crashes:

🔗 The road crash data in stats19

There are three main different types of CSV files released by the DfT: accidents, vehicles and casualties tables. There is a schema covering these tables but a good amount of work is needed to understand it, let alone be able to process the data contained within the files and convert the integers they contain into meaningful data.

With those introductions out of the way, lets see how the package works and how to access STATS19 data, back to 1979. First install the package in the usual way:

Attach the package as follows:

The easiest way to get STATS19 data is with get_stats19(). This function takes two main arguments, year and type. The year can be any year between 1979 and 2017.

What just happened? We just downloaded, cleaned and read-in data on all road crashes recorded by the police in 2017 across Great Britain. We can explore the crashes_2017 object a little more:

The package contains the names of all “zip” files released by the DfT and hosted on Amazon servers to download. These file names have been included in the package and can be found under file_names variable name. for example:

You can also get the raw data (if you really want!) to see how much more useful the data is after it has been cleaned and labelled by the stats19 package, compared with the data provided by government:

The first two columns are raw read, the next two are formatted by stats19 package:

Note: the severity type is not labelled (this problem affects dozens of columns), the column names are inconsistent, and the dates have not been cleaned and converted into a user-friendly date (POSIXct) class.

An important feature of STATS19 data is that the “accidents” table contains geographic coordinates. These are provided at ~10m resolution in the UK’s official coordinate reference system (the Ordnance Survey National Grid, EPSG code 27700). stats19 converts the non-geographic tables created by format_accidents() into the geographic data form of the sf package with the function format_sf() as follows:

An example of an administrative zone dataset of relevance to STATS19 data is the boundaries of police forces in England, which is provided in the packaged dataset police_boundaries. The following code chunk demonstrates the kind of spatial operations that can be performed on geographic STATS19 data, by counting and plotting the number of fatalities per police force: 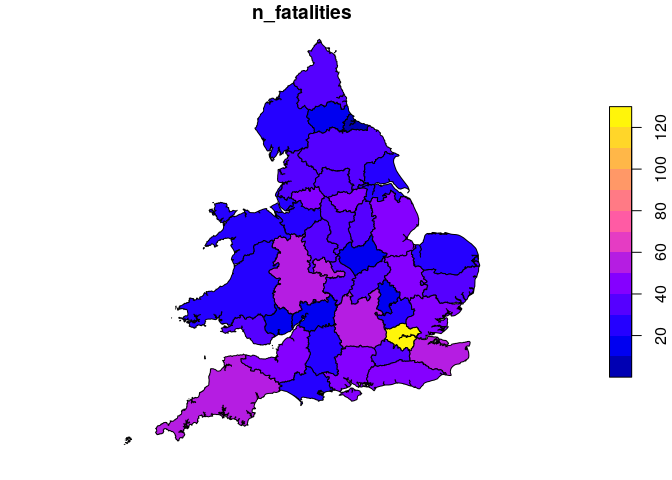 We can combine the three sets of tables (accidents, vehicles and casualties) to analyse the data further. Lets read the datasets first:

We found the subset of casualties that took place in West Yorkshire with reference to the accident_index variable in the accidents table. Then we used the dplyr function summarise(), to find the number of people who were in a car, cycling, and walking when they were injured. This new casualty dataset is joined onto the crashes_wy dataset. The result is a spatial (sf) data frame of crashes in West Yorkshire, with columns counting how many road users of different types were hurt. The joined data has additional variables:

In addition to the Total number of people hurt/killed, cj contains a column for each type of casualty (cyclist, car occupant, etc.), and a number corresponding to the number of each type hurt in each crash. It also contains the geometry column from crashes_sf. In other words, joins allow the casualties and vehicles tables to be geo-referenced. We can then explore the spatial distribution of different casualty types. The following figure, for example, shows the spatial distribution of pedestrians and car passengers hurt in car crashes across West Yorkshire in 2017:

To show what is possible when the data are in this form, and allude to next steps, let’s create an interactive map. We will plot crashes in which pedestrians were hurt, from the crashes_types, using leaflet package:

The R leaflet package is not easy to embed in an .md file for the rOpenSci blog entry. Therefore, we also wrote a “custom” LeafletJS chunk below and use htmltools to embed the interactive map here. Feel free to use the chunk in your own work by replacing the geojson content generated from the preceding code.

stats19 provides access to a reliable and official road safety dataset. As covered in this post, it helps with data discovery, download, cleaning and formatting, allowing you to focus on the real work of analysis (see the package’s introductory vignette for more on this). In our experience, 80% of time spent using STATS19 data was spent on data cleaning. Hopefully, now the data is freely available in a more useful form, 100% of the time can be spent on analysis! We think it could help many people, especially, including campaigners, academics and local authority planners aiming to make the roads of the UK and the rest of the world a safe place for all of us.

There are many possible next steps, including:

Finally, thanks to all those who have contributed to the package especially Mark Padgham and who are not mentioned in this blog post. Also, we want to take the opportunity to celebrate the release of stats19 🎉, thank rOpenSci for a great review process 🙏 and let you know: the package and data are now out there, and are ready to be used 🚀.