June 22, 2021 From rOpenSci (https://ropensci.org/blog/2021/06/22/setup-runiverse/). Except where otherwise noted, content on this site is licensed under the CC-BY license.

This post is part of a series of technotes about r-universe, a new umbrella project by rOpenSci under which we experiment with various ideas for improving publication and discovery of research software in R. As the project evolves, we will post updates to document features and technical details. For more information, visit the r-universe project page.

The r-universe platform provides users and organizations with a personal CRAN-like repository for publishing software, rmarkdown articles, and other content that fits in an R package.

The initial pilot was mostly focused mainly on CRAN/rOpenSci developers, but as of last month we have opened up the system for anyone to create a personal R universe and start publishing packages.

Creating a universe for your R packages is easy and can be done in a few simple steps:

In this technote, we describe these steps in more detail. You can also watch the recording from our community call about getting started with R-universe or flip through the slides with screenshots.

In r-universe, every user has a private subdomain, where you control the content, and which does not interfere with other users. The subdomains are tied to the GitHub account with that name. For example my GitHub username is jeroen and therefore my subdomain is https://jeroen.r-universe.dev, and packages from the rOpenSci organization get published to https://ropensci.r-universe.dev. Note domain names are by definition case-insensitive and lowercased.

Hence, in order to start a universe you need a GitHub account. However the R packages themselves do not necessarily need to exist under that same account. They don’t even need to be on GitHub: they may be hosted on any public git server. If your R packages are hosted on another git service, such as Gitlab, or a university git server, you can simply use a GitHub account only for publishing a packages.json registry for that username, without having to buy into the full GitHub platform.

In order to publish content on r-universe, you need to create a registry file called packages.json, which lists the git urls containing the R packages you want to include in your universe. The file is formatted as a JSON array with required fields package and url for each entry, for example:

You can either hand-write this packages.json file, or programmatically create it using the tools of your choice. For example you can generate it in R from a data frame using jsonlite:

The url value must be a public git url. This is important; our build servers literally call git clone ${url} on each of the entries. The package field must match the name of the R package from the DESCRIPTION file under that url. If the R package does not live in the root of the git repository, you also need to set the subdir field to the path of the R package root directory.

When creating a new universe, start by adding no more than a few packages. You can easily add more packages later by updating your packages.json file.

To publish your registry, simply create a git repository called universe on your GitHub account and push your packages.json file. See for example: https://github.com/maelle/universe.

Once you pushed your packages.json file to your new universe repository on GitHub, the next step is to install the R-universe GitHub app on your account. 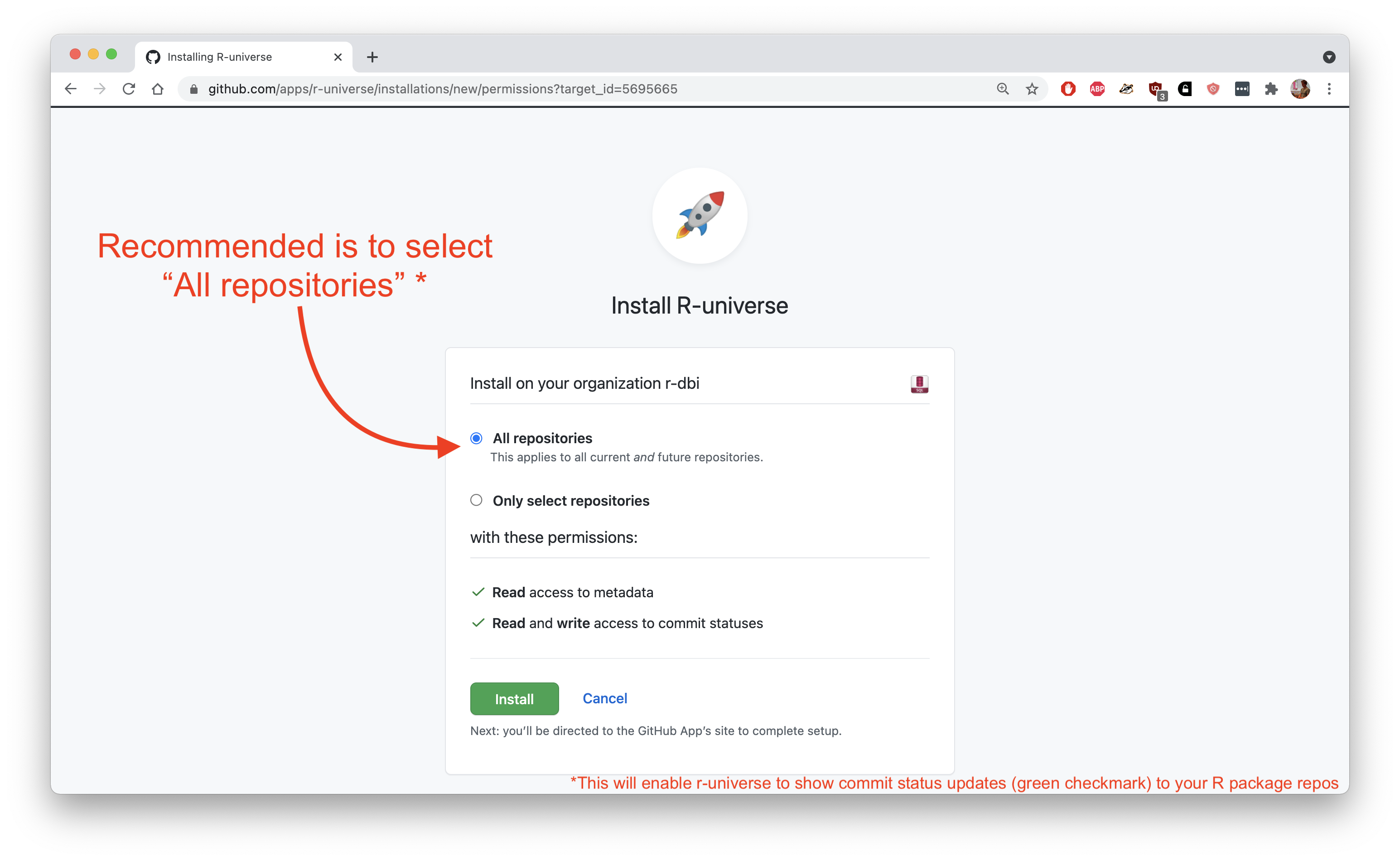 The GitHub app requires very limited permissions, it only requests permission to read and write commit statuses. This means that the R-universe build system can post a green checkmark on your package git commits, once your package is successfully built and deployed to R-universe. Thereby R-universe serves as a full CI-CD system that shows you if your package build and deploy was successful. 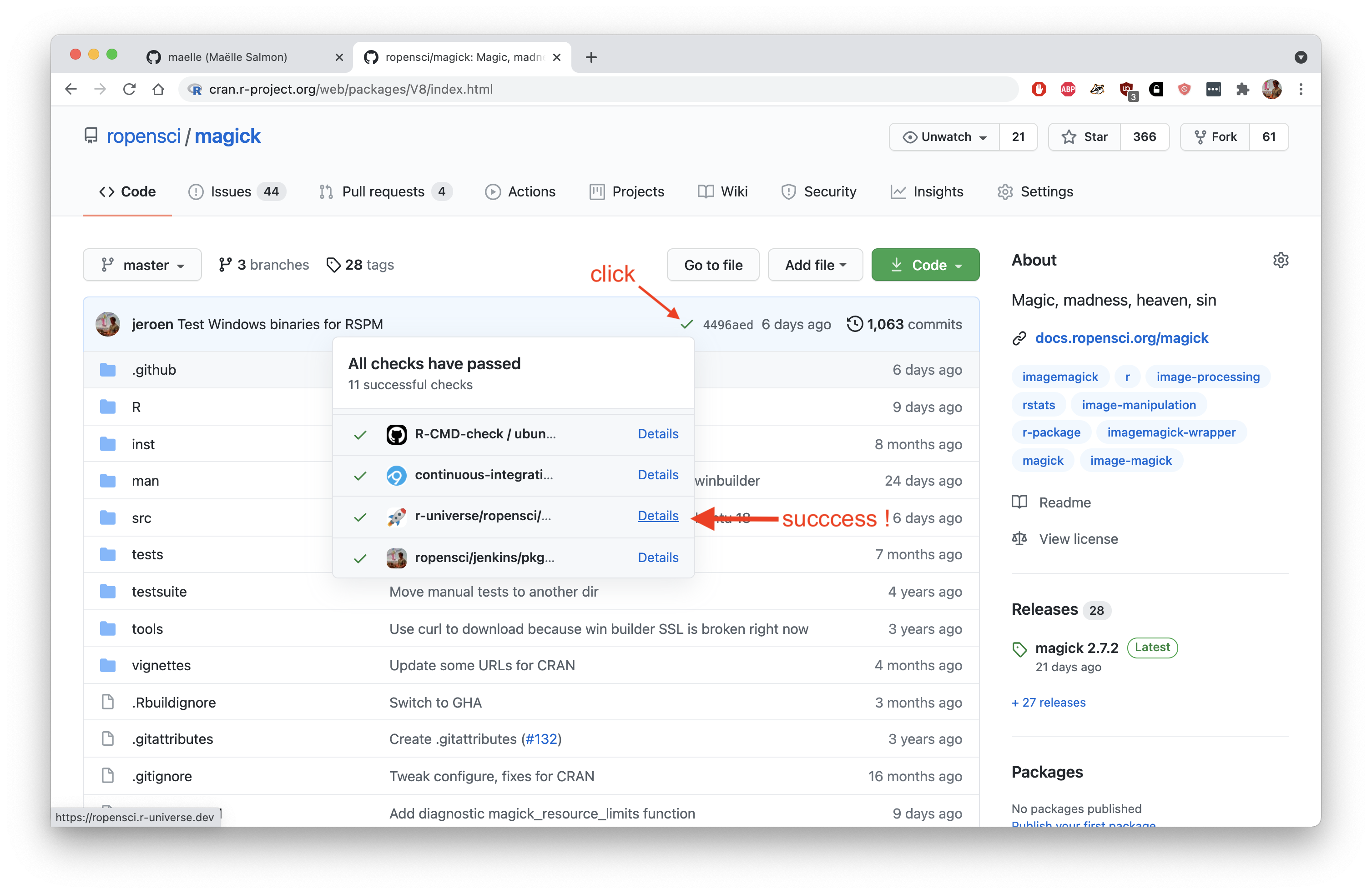 Once you installed the app, the system will automatically create your personal monorepo under the r-universe organization: https://github.com/r-universe/<yourname>. This is where the system keeps the full history of your packages, as explained in a previous technote about the r-universe build system. The actions tap of your monorepo is also where the building happens. 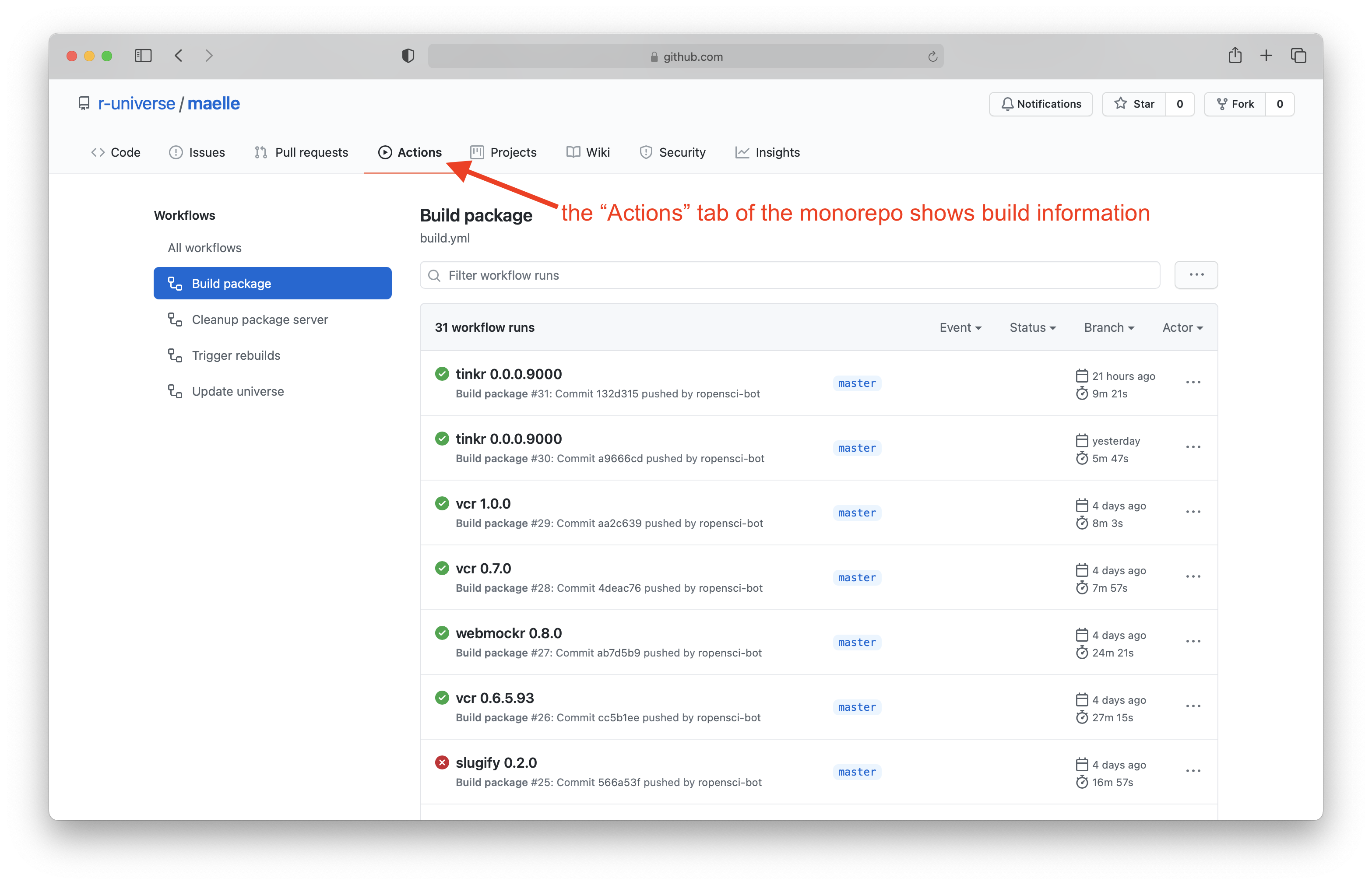 After a while (usually no more than one hour), packages and articles that have completed building on all platforms will start appearing on your dashboard, and directly become available for installation by users. 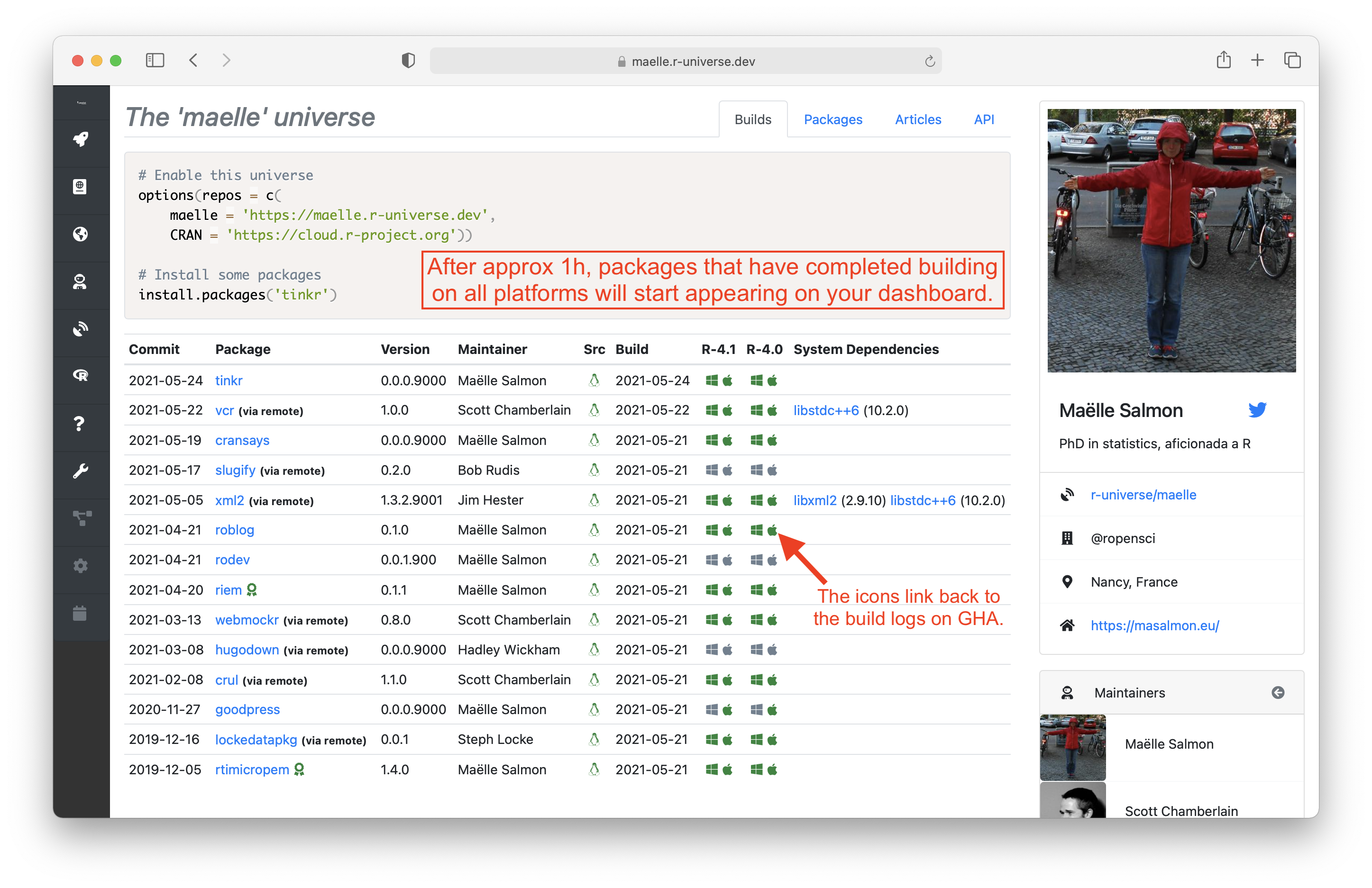 Once your packages have appeared on the dashboard, try installing them in R using the instructions from the dashboard page, for example:

To help your users, you can consider copying these instructions to your package README.md files. And of course you can add an r-universe badge to your readme as well.

The badge API is simply /badges/<package> which will yield an SVG image that can directly be embedded into your markdown files, showing the deployed version for the given package:

For example this would produce the following badge:

By default, R-universe tracks and builds the default branch for each package git repository, e.g. master or main. It is possible to customize which git branch or tag to track by adding a branch field to the registry.

The branch field can take the name of any git reference (either a branch or a tag). You can also set it to a special value "*release" which will automatically lookup the most recent GitHub release, using the same syntax as in remotes. For example:

If you just want to use the default git branch, it is safest to omit the branch field. This way everything will keep working, even if the default branch gets another name at some point in the future.

When browsing the r-universe homepage you may notice that some major universes that contain many CRAN packages do not have a packages.json registry. How is this possible?

When the r-universe app is installed on a GitHub account that does not have a proper packages.json file, the build system automatically starts adding all packages from CRAN which are owned by that particular GitHub account. Ownership is determined by the presence of a link to a GitHub repository in the URL or BugReports field of a CRAN package. Our scraper scans all CRAN packages for GitHub links on a daily basis and stores results in the cran-to-git database.

These are effectively auto-generated registries, on which the build system will fall back if the user does not have a personal registry. As soon as the user creates a proper universe registry repository with the packages.json file, this will take precedence, and the build system will automatically switch over.